The Salish Sea is home to a large population of Canadians living in coastal communities at risk to ocean related hazards. There is an ongoing need to assess the impact of these hazards on human and marine environments through a multidisciplinary approach involving Canadian oceanographers, biologists, and social scientists. The Marine Environmental Observation Prediction and Response network (MEOPAR) provides a platform to accelerate this type of research.

The Salish Sea MEOPAR project team is developing a three-dimensional ocean model for the Strait of Georgia and Salish Sea. Using the NEMO modelling architecture, the Salish Sea model will be used to evaluate storm surge risk in coastal communities. Long term goals include data assimilation from the VENUS network and a coupled biogeochemical modelling component.

The region covered by the model includes the Straight of Georgia, Straight of Juan de Fuca, Johnstone Strait, Fraser River, and other connecting waterways. 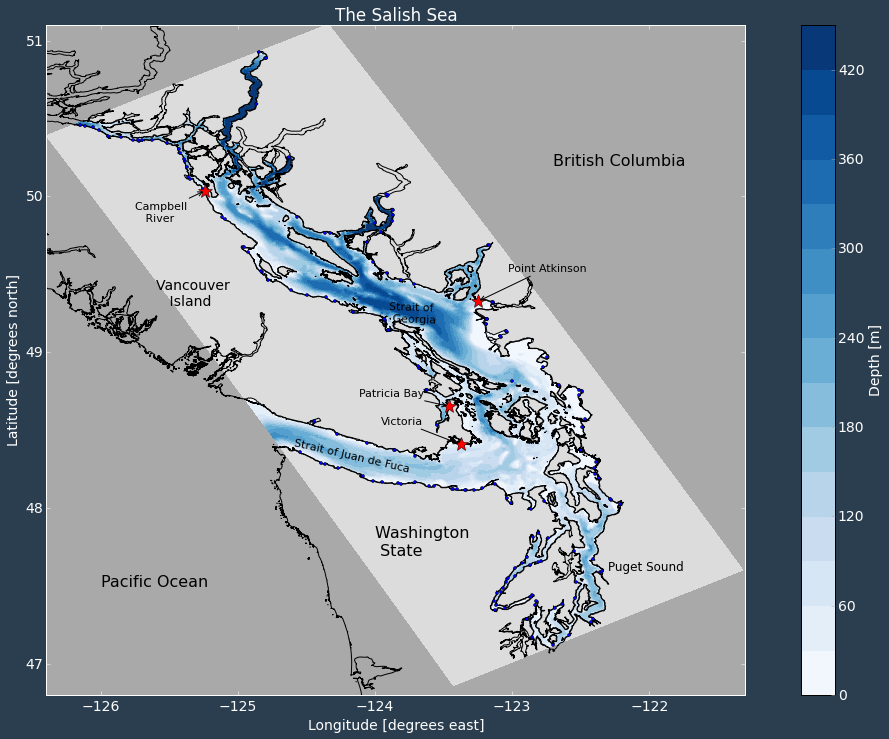 Our model results include storm surge alerts and the region's atmospheric and marine conditions. They are available in a number of formats:

General evaluation: as a slide presentation

Mixing in San Juan/Gulf Islands: The sensitivity of the deep water renewal into the Strait of Georgia and of fresh water pulses into Juan de Fuca Strait to modelling choices affecting both turbulence and advection has been determined. (Soontiens, N. and Allen, S. Modelling sensitivities to mixing and advection in a sill-basin estuarine system. Ocean Modelling, 112, 17-32. https://dx.doi.org/10.1016/j.ocemod.2017.02.008

The Salish Sea NEMO Model project is lead by Susan Allen in the Department of Earth, Ocean, and Atmospheric Sciences at the University of British Columbia. Other team members:

The team collaborates with other MEOPAR funded research teams at UBC:

We also collaborate with MEOPAR researchers and NEMO users across Canada:

Much of our evaluation data, some of our funding, and access to computing resources for our daily runs comes from Ocean Networks Canada (ONC) Our contacts with ONC include:

We collaborate with many other researchers, including: